The object of the game is to beat the Banker. The Banker can be any Player or the Dealer. Any Player who wishes to Bank must accept responsibility for all wagers made during that round of play. The Banking option will be offered to each Player, in turn, rotating in a counterclockwise direction. The Banking Player must have enough chips to cover all wagers placed in that round and must have wagered in the previous round that the Dealer acted as Banker. No Player will be required to accept the Bank and the Dealer will act as Banker when all Players decline.

Pai Gow is played with a set of 32 Chinese tiles, which form 16 permissible pairs. A hand with any permissible pair is ranked higher than a hand that does not contain a pair. The highest ranking hand is the Supreme Pair, followed by Matched Pairs, and Unmatched or Mixed Pairs. The next highest-ranking hands are special combinations known as Wongs and Gongs. Hands consisting of Wongs or Gongs are ranked lower than Pairs.

Wongs are formed with the highest-ranking single tile, 12, and either 9 (Teen Wong) or the second-highest tile, 2, and either 9. Please refer to the Single Tile Ranking Chart.

Gongs are formed with the highest-ranking single tile, 12, and any 8 (Teen Gong) or the second-highest tile, 2, and any 8 (Day Gong).

To find the numeric value, add the spots on each tile. The total will never be higher than 9 because only the last digit in the total number of spots is used. To find the ranking of each tile and each permissible pair, refer to the ranking charts. Two tiles will combine to form a hand. Add the total number of spots contained on the two tiles. If the numeric total of the spots is a two-digit number, the left digit is discarded and the right digit is the value of the hand.

READ THIS: How To Play Let It Ride Poker

**When two hands have the same numeric value of zero, they are considered equally bad, regardless of the high tile and the Bank will win all zero tiles. When the two tiles that form the highest-ranking hand (the Supreme Pair) are used separately, the numeric value is interchangeable. The 3 can be counted as 6 and the 6 can be counted as 3. They lose their highest pair rank and become low-ranking tiles (fifteenth and seventeenth on the
Single Tile Ranking Chart).

To begin the game, the Players will place their wagers before the Dealer announces, “No more bets.” The Dealer will shuffle or “wash” the tiles and stack them into eight stacks of four tiles each. Three dice, contained inside the Pai Gow shaker, will be used to determine the starting position for dealing the tiles. The Dealer or Banker will shake the Pai Gow shaker at least three times. The Dealer will uncover the dice and announce the total. The count will begin with the Dealer or the Banking Player and continue with each betting position in a counterclockwise direction until it matches the total on the dice. That position will receive the first stack of tiles.

After the tiles have been delivered, each Player will “set” their tiles into two hands of two tiles each; a High Hand and a Low Hand. The Players will place their hands face down behind the betting area, separated into two distinct hands. Once the Player has set his tiles face down on the layout he or she will not be permitted to touch the tiles again.

Each Player at the table is responsible for setting his or her own hands and no other person except the Dealer may touch the tiles of that player. Each Player is required to keep the four tiles in full view of the Dealer at all times.

After the Players have set their hands, the Dealer will arrange the tiles into a High and Low Hand. The Dealer must set their hand by using a set of rules known as “the House Way.” A copy of these rules is available at the Security Podium. Players may request assistance from the Dealer in setting their hands according to House Ways.

Any Player wishing to join in a partnership with the house may do so by requesting Co-Banking. Co-Banking occurs when the requesting Player and the Dealer act as the Banker on a fifty-fifty basis. When Co-Banking is in effect, the Dealer handles the Bank hand, setting it according to House Ways.

All wagers at Pai Gow shall be made by placing gaming chips or match play coupons on the appropriate betting area of the layout, before the Dealer has announced “No more bets,” at which time no wager may be increased or withdrawn.

No verbal wagers accompanied by cash are accepted.

Only Players who are seated at the Pai Gow table may place a wager at the game. Once a Player has placed a wager and received tiles, they must remain seated until the completion of the round of play. 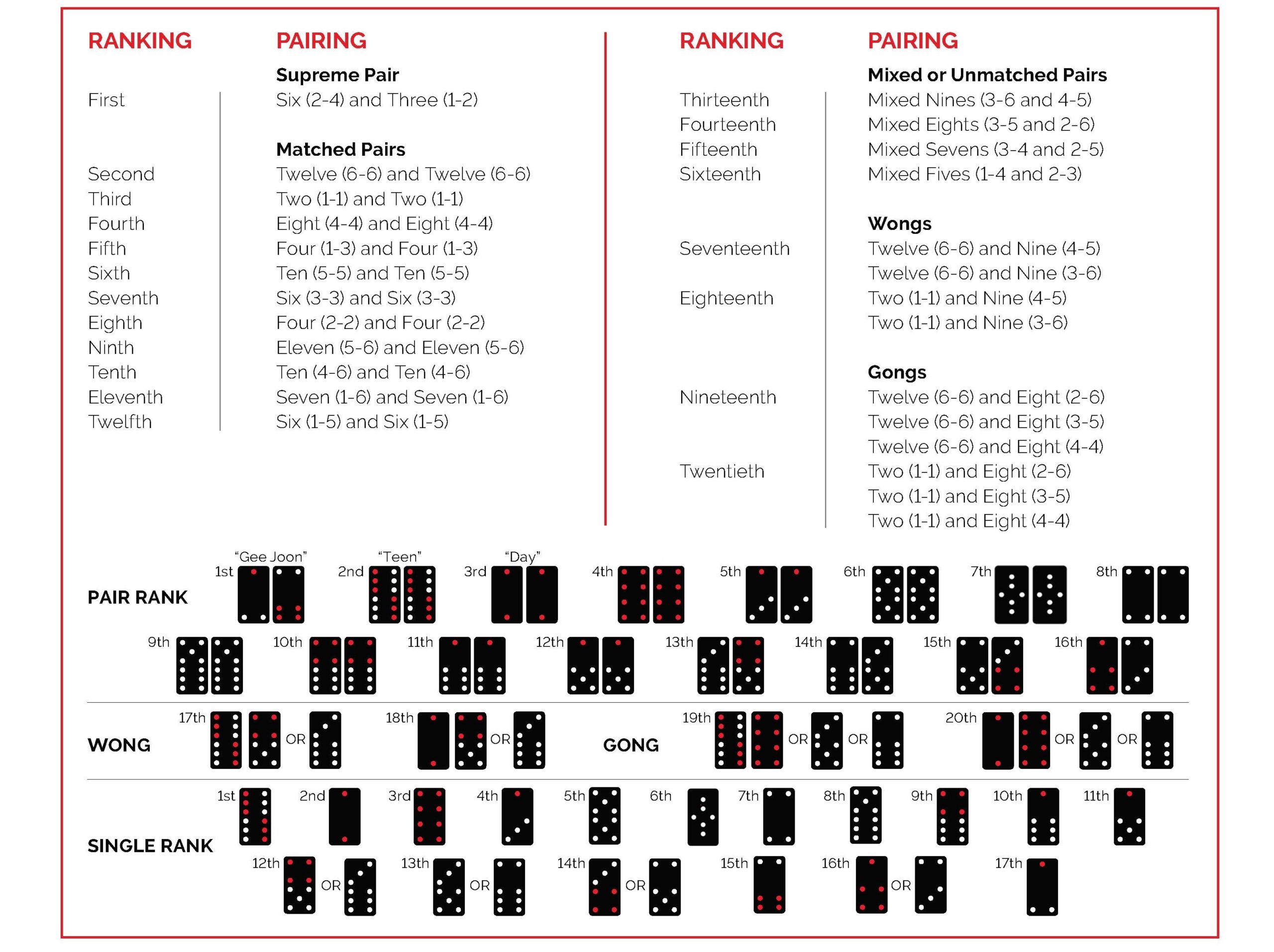 When comparing high hands or low hands that are of identical permissible pair rank, the hand is considered a copy hand, and the Banker wins the hand. When comparing the rank of high hands or low hands which do not contain any of the pairs listed in the higher ranking, the hand is determined on the basis of the value of the hands. The value of a hand is a single digit number from 0 to 9 inclusive and is determined by adding the total number of spots that are contained on the two tiles which form the hand. If the total of the spots is a two-digit number, the left
digit of the number is discarded and the right digit constitutes the value of the hand.

If the highest ranking tile in each hand being compared is of identical rank, the hand is considered a copy hand, and the hand of the Dealer is considered the higher ranking hand.